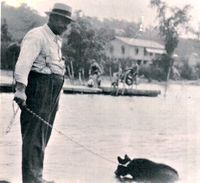 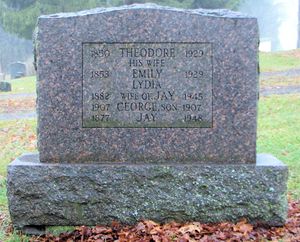 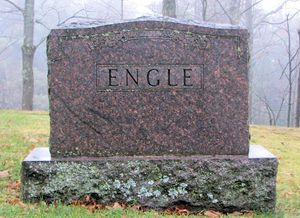 Jay Engle, retired merchant, died suddenly the afternoon of Christmas day, at his home on Helderberg avenue, Altamont. Mr. Engle had been under the doctor's care for several years. Apparently he had felt as well as usual during the week, had enjoyed with his wife the greetings from friends and acquaintances, and other features of the holiday season.

Born in Berne some 71 years ago. Mr. Engle had spent the major portion of his life in the vicinity of his birthplace. For 30 years he carried on a store business at Warner's Lake. He also had a bathing beach which was well patronized in season. In 1947 he retired from business, and purchased the property at 103 Helderberg avenue, Altamont. where he had since made his home. Kindly, sociable in manner, Mr. Engle's friends and acquaintances were many.

Surviving Mr. Engle are his wife the former Anna Powers of East Berne and a sister, Mrs. Hilts of Schenectady.

Floyd Engle, formerly of West Berne, but now of the Philippine Islands, is confined in a hospital in Manila with bladder trouble. His friends hope for his speedy recovery. He is located in Tacloban Leyte Island, P. L and is in the automobile business with two partners.

Mr. and Mrs. Theodore Engle received a letter from their son Floyd who is still in the Philippines, stating he is well and is preparing to come to America. He also sent them a very nice present in the form of gold.

An auto party from Schenectady accompanied by Mrs. Della M. Hilts of Schenectady, and her parents, Mr. and and Mrs. Theodore Engle and grandchildren Rose Emma Hilts and Floyd Hilts, Monday motored through some parts of Otsego county, going as far as Oneonta. The party all enjoyed the trip very much.

Mrs. E. Engle and daughter, Della and Ro,e Emma Hilts and a friend from Schenectady motored to Warner's Lake Sunday afternoon and took supper at the home of Mr. and Mrs. Jay Engle where they spent the evening. Floyd Engle who has just returned from the Philippines is there with his brother Jay trying to regain his health. We think he is a little on the improve.

Mr and Mrs. James G. Page of Altamont are moving back on their farm here. J. G. Page, and wife recently were overrnight visitors at the home of her sister, Theodore Engle and wife and son, Floyd Engle.

Theodore Engle is spending a few days at the home of his son and daughter in-law. Mr. and Mrs. Jay Engle. at Warner's Lake, assisting them. Jay Engle had the misfortune to burn his hands and arms very badly by the explosion of a gas stove Sunday afternoon. A doctor and a nurse are attending him.

Floyd Engle seems to be enjoying the Helderberg air, as he goes daily on his motorcycle for a "stroll." He has improved wonderfully since coming to his parents' to live nearly two years ago.

Life at the Lake: The good, the bad, the ugly

WARNER'S LAKE — If the new book, Life at the Lake, is any indication, there have been some eccentric folks at Warner's Lake over the years.

Among the hundreds of stories in the pages of Life at the Lake, published last Friday by the Warner's Lake Improvement Association, readers can find characters like Jay Engle.

Jay Engle, owner of Engle's Fur Trading Post on the lake in the 1920's and '30's, is best remembered for his pet bear. Pictures in the book show Engle taking his bear for a swim on a leash, and sitting on a picnic table, the bear lounging against his side.

Edward Pitcher remembers: "I was in Engle's Store one day when a customer wanted to return a candy bar that had worms in it. In those days, they kept the candy and goodies over the winter as a way of saving money. Anyway, Lydia Engle told them they did not give money back for damaged goods but they were more than welcome to feed the candy bar to the pet bear."

Engle's name comes up often in the book as an eccentric and a trickster. One Warner's Lake oldtimer remembers him duping tourists about Indian dances on the top of Mt. Grippe. These stories are only a fraction of the fascinating memories, pictures, and documents available in Life at the Lake.