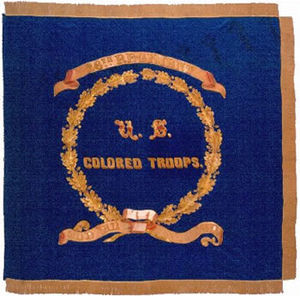 Unit Flag of the 26th USCT

Toliver was born a slave to the Holmes family about 1844 in Virginia. He did not know the names of his parents. His service record indicates that he was born in Walkestown, VA and that he was about 22 years old at the time of his enlistment.

Toliver married at about 1868, Maria Parish who was born at about 1845 in New York and had the following known children all born at Pittsfield, Otsego Co., NY: 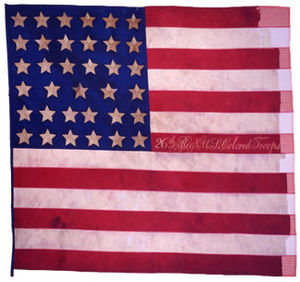 Regimental Flag of the 26th USCT

The story of Toliver’s race to freedom didn’t mention that it had been a part of an organized venture such as the Underground Railroad, but it is evident that there was a plan or a network that led him first to Rensselaerville then on to Gilbertsville and Pittsfield where there were numerous other families of former slaves, all from Virginia.

Toliver Holmes Dead.
Toliver Holmes, who for many years following the Civil War, was a resident of Pittsfield, where he married into the well-remembered Parrish family and raised a family, and was highly respected by all who knew him, died in Delhi, which had long been his home, March 7th, aged 79 years.
The Delaware Express notes the death of this Christian colored man as follows:
Though one of the blackest of colored men, Toliver had a white soul and a stout heart. He was a typical southern darky having first seen the light of day down in Virginia and was born into slavery. Up to the time of the clash between the North and South his days had been spent in hard and unremitting toil on a Virginia plantation, but when the war broke out he made a dash for freedom, and by traveling at night and hiding during the day he escaped capture, and kept going north until he reached the Union lines. He then joined the ranks and fought with the Northern forces until the close of the war.
As he was known while in slavery only by his given name, Toliver, upon being registered with the soldiers he took the surname of his former master, Holmes, and was ever after known as Toliver Holmes, except that while in the service he went by the name of Oliver Holmes in order to be more secure against capture and return to his master. As Oliver Holmes he drew a soldier’s pension from Uncle Sam up to the time of his death.
After the war he drifted north and finally located in Delhi, where he was for many years employed as general caretaker of the place of the late Miss Virginia Swope. He was known to every one in town and always had a cheery courteous greeting for all whom he met. His wife, Mary Parrish, has been dead for some years, but he is survived by several daughters and a son. The son and two daughters, Mrs. Bellamy and Miss Helen Holmes, all of Chanango county, were called here by his death, March 17, 1920.
Holmes’ pension record clarified that he had been married twice. His first spouse was Julia M. Parrish of Pittsfield, Otego County. She died in 1892.
Holmes next married the former Mary Law at Delhi, Delaware County, during 1895.
The above record indicated that Holmes had been a private in Company I, 26th USCT. After the war, he relocated to Gilbertsville, Butternuts Township where he lived for three years. He then moved to neighboring Pittsfield, where he lived for twenty-seven years.

Was a runaway Slave before the Rebellion, broke out came to Rensselaerville from Virginia where he was owned; he made his home at Dr Platt Wickes before enlisting and after the war. Discharged June 1865 (still living) P.O. address Rensselaerville Albany Co N.Y.