Also known as Edmond Holmes, he was born in October of 1833.

He was a shoemaker

Some records for Edmund Holmes and Erastus Holmes, as well as those of James Holmes confused clerks who inadvertantly misfiled information from one or the other in the wrong file. The pension file for Erastus contained papers from Edmund's files. 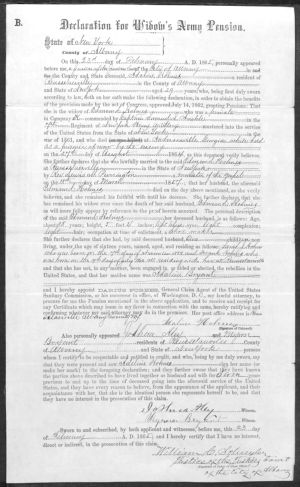 Edmund Holmes was born in Claverack, Columbia county, in the year 1835. He was the son of Joseph and Catharine Holmes. From his childhood, he was noted for his truthfulness and his obedience to his parents.

At the time the war broke out, he was a shoemaker by trade, and had a wife and several children. His strong love of country led him to enlist July 17, 1862, in the One Hundred and Thirteenth Regiment N. Y. V.

His regiment was stationed at Fort Reno, D. C, for nearly two years. In May, 1864, it received marching orders, and all through the battles of the Wilderness that regiment was ever distinguished for its bravery. On the 16th of June, many of the regiment were taken prisoners by the enemy, and among the number was Edmund Holmes. He was taken to Andersonville, Ga., where he remained until removed by death, August 21, 1864. His sufferings were very great, yet he never regretted enlisting for his country. A short time before he died, he spoke to a friend, who was with him, of his extreme exhaustion, and tinning over upon his side he expired. He was buried where he died, and where many of our bravest and best are sleeping.

Mr. Holmes was a good citizen, a true patriot, a brave soldier, and a kind husband and father. As his children grow up, they will have the consciousness that their father gave his life for his country; that even amid the horrors of a most foul and cruel imprisonment, he .did not regret the sacrifices that he was making for liberty and the American Republic."