Arthur was born in Knox on June 14, 1838, a son of Joseph Haswell and Frances Freligh.

Arthur Haswell was originally buried at Parade Burial Ground in Louisanna. His was one of the 35 bodies that were retrieved in December of 1863 by Captain Morgan L. Filkins and brought home for burial. He was then buried in Albany Rural Cemetery, Albany, NY in lot #34, section 7, a plot owned by Mrs. Anna Freligh.[4] 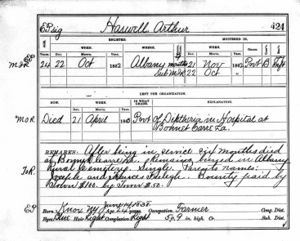 21 April, Tuesday - Regimental dress parade, with short Battalion drills after parade. The paymaster went up the river to pay Co. A. and Captain Read’s cavalry (3rd MA) at Humprey’s. Company drills at 4 o’clock. Arthur Haswell of Co. B was buried this afternoon. He was formerly a resident of Knox.