Difference between revisions of "Falk, William B."

From Helderberg Hilltown Biographies
Falk, William B.
Jump to navigation Jump to search

William Faulk was born in Potters Hollow on August 13, 1834, a son of David Falk and Adeline Briggs

William was a machinist for most of his life. Before his death, he was a merchant. 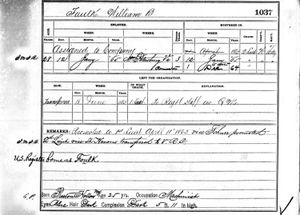