Charles was born in Knox on March 13, 1838, a son of David Engle and Catherine Swart. He was a brother to Jacob and John Engle who were killed in action in the Civil War.

Charles married on August 27, 1859, Charlotte Bronk who was born on June 4, 1836, a daughter of Joel Bronk and Christina Eva Warner[1] and had the following children: 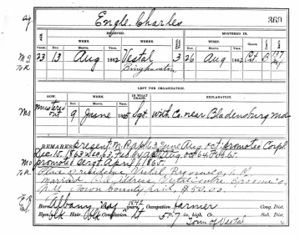