Eli Deitz was born in Berne ca. 1837, the son of David Deitz and Martha Wright. His brother Samuel Dietz was also a soldier in the Civil War. Their father presumably died before 1850.[1]

Before the war Eli was a farm laborer[2]

Eli died on May 18, 1862 at Stillwater, Saratoga Co., NY and is buried at the Baptist Cemetery there. On June 21, 1876, Eli's mother, Martha Deitz, received a pension based on his civil war service. 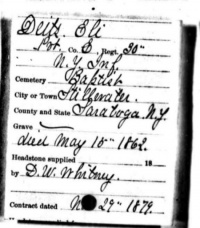 The index card for a grave marker provided for deceased veterans.