Lawrence CLIKEMAN emigrated from his native land, Germany, during the Revolutionary War, in which he served as a soldier in the British army. During the conflict he was taken prisoner, and upon being liberated became a legalized citizen of the U. S. He died in the town of Knox, Albany County, NY.

Lawrence Clikeman had two sons with two half-brothers, and was a farmer by occupation, and began farming in the town of Knox, where he cleared a farm and built a log house and where he lived till his death, at the age of eighty years.

Lawrence Clickeman married and his children were: 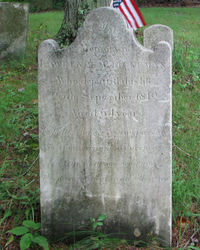 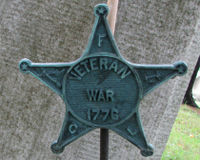 Lawrence Clickeman died September 25, 1812 and was buried in Knox - High Point Cemetery - Lawrence Clickeman who departed this life 25th Sept. 1812 Aged 64 years Behold and see as you pass by - As you are now so once was I - As I am now, so you must be - Prepare for death and follow me

CLIKEMAN, Miner 1st Biography of Miner CLIKEMAN Past and Present of the City of Rockford and Winnebago Co., IL, C. A. Church. Chicago: Clarke, 1905, pp 716-719. (Portraits of Mr. and Mrs. MINER CLIKEMAN p 717) Miner CLIKEMAN, a retired farmer living on Kilborn Avenue, in Rockford [Winnebago County, IL], was for many years associated with agricultural interests in Winnebago County, and in his life displayed the many sterling characteristics of his German ancestry.

His paternal grandfather, Lawrence CLIKEMAN, came to America from Germany in 1776, in the employ of the British army, and during the war was taken prisoner. On being liberated he announced his allegiance to the U. S., becoming a citizen of the new republic.

His son, Peter CLIKEMAN, was born 27 Aug 1798, in Albany County, NY, and was a farmer throughout his entire business career. He earned a living for himself and family in the early days among the hills and rocks of his native county. Having arrived at years of maturity he wedded Jane HILLIGASS, who was also a native of that county, born 21 Jun 1798.

Miner CLIKEMAN was born 26 Feb 1832 upon his father's farm about 12 miles from Wright, in Schoharie County, NY, and pursued his education in the subscription schools. [p 719] He spent his youth and early manhood in the east and came first to Winnebago County, IL, in 1857, but at that time remained for only about six months. He then returned to NY and in 1861 he again spent six or eight months in this county. In 1862 he brought his family and made a permanent location in Winnebago County, taking up his abode in Owen Township, where he worked at carpentering, being engaged in the building of houses and barns for some time. In March 1868 he purchased 160 acres of raw prairie land, wich he at once broke and upon the plowed ground scattered the seed that in due time brought forth good harvests. He also further improved his place by the erection of a house and barn and planting of trees. He planted two orchards upon this place and his son, Charles, is now setting out the third one. In the 1870's he bought another tract of land of 140 acres, so that his farm now comprises 260 acres, all of which is well improved, constituting one of the best properties of the township. While carrying on agricultural pursuits Mr. CLIKEMAN also worked at his trade in different states and many evidences of his handiwork are seen in Winnebago County.

In 1852 Mr. CLIKEMAN was married to Miss Ann Elizabeth ALLEN, a daughter of William and Elizabeth (ANGLE) ALLEN. Her father was a carpenter by trade and provided for his family by following the builder's art. He spent his entire life in NY, and died in Bern, Albany County, NY, where his birth had occurred 82 years before. [Note the second biography below states William ALLEN was thought to have been born there. Bern, Albany County, NY, was formed from Rensselaerville in 1795.] His wife passed away 29 Jun 1879, at the age of 62 years and ten months. In their family were seven children: Ann Elizabeth, born 24 Jun 1832; Margaret; Richard; Liddy S.; Joseph; Everett; and Isaac M. Mr. and Mrs. CLIKEMAN were married in Bern, Albany County, NY, 04 Jun 1852, and became the parents of seven children, five of whom are natives of NY, while the other two were born in Winnebago County [IL]. Charles, born 12 Dec 1853, wedded Mary CUNDIFF and they have four children, their home being on the old farm belonging to his father. Sidney D., living in Jackson County, MN, was born 02 Mar 1855, and married Miss Hattie OLIVER, by whom he has five children. Austin, who was born 25 Sep 1856, and lived at Greene, Butler County, IA, married Julia CARPENTER and has one child. Verna, born 30 Jun 1858, is a resident of Rockford. Laura, born 13 Feb 1860, died on 21 Feb 1860. Adela, who was born 09 Oct 1864, died 23 Feb 1879. William C., born 23 Apr 1868, married Bird SHELEY and is a barber of Chicago.

After being connected for many years with agricultural pursuits, Mr. CLIKEMAN retired from business life and is now enjoying a well earned rest in Rockford. He has served as school director for 12 years, and has always been interested in the cause of education, exercising his official prerogatives to advance the standard of the schools. His political allegiance has been given to the republican party since age gave to him the right of franchise. He has led a very busy life and his own labor has been the basis of his success. In an analyzation of his character we find that the strong elements are persistent purpose and a thorough mastery of whatever duty has devolved upon him.

A prominent position among the prosperous and thrifty farmers of Winnebago County [IL] is occupied by this gentleman, who owns and operates a fine estate in Owen Township. He was born in Wright, Schoharie County, NY, 26 Feb 1832. He comes of German ancestry, his grandfather, Lawrence CLIKEMAN, having emigrated from his native land, Germany, during the Revolutionary War, in which he served as a soldier in the British army. During the conflict he was taken prisoner, and upon being liberated became a legalized citizen of the U. S. He died in the town of Knox, Albany County, NY.

Peter CLIKEMAN, father of our subject, was born in Albany County, NY, was there reared, married, and followed farming pursuits. After the Civil War he came West to Winnebago County and spent his last years with his children. His marriage united him with Jane, daughter of John and Magdaline HILLIGASS, and a native of NY, her death occurring in the town of Wright [Schoharie County, NY]. She reared seven children: Mary A., Magdaline, John F., Miner, Seneca, Jacob A. and Peter H. [Note that the 1905 biography of Miner CLIKEMAN presented above lists nine children, born from 1824-1840. Hannah and Eliza are not included in this 1892 biography.]

The subject of this sketch was reared in his native county and at the age of 19 engaged to learn the trade of a carpenter and joiner, at which he served an apprenticeship of three years and then followed the trade for one year in NY. In 1862 he removed West to IL, and settling in Owen Township, operated as a renter for about six years and also worked a time at his trade. His next venture was the purchase of the farm where he now resides, which at that time was entirely unimproved, having not a single tree nor any building upon it. He has planted fruit, shade and ornamental trees, erected a fine set of farm buildings, and brought the 260 acres to fine cultivation. In 1886 he bought 160 acres in Jackson County, MN, which are well improved and embellished with suitable buildings, and that place he now rents.

The family of Mr. and Mrs. CLIKEMAN includes the following living children: Charles, Sidney, Austin, Vernie A. [name given as Verna in the first biography] and William C. Adella [name given as Adela in the first biography] and Laura are deceased. Charles CLIKEMAN is a carpenter and joiner, but is at present managing his father's farm. Sidney, now residing in Rockford, is a thorough and skilled mechanic. Austin is an extensive farmer at Greene, Butler County, IA. [p 818] Vernie A., now residing in Rockford, has followed school teaching for 10 years, and is one of the best teachers in Winnebago County; he is an exemplary young man, of good moral habits, and is connected with the Court Street Methodist Episcopal Church. William C. is a professional tonsorial artist of Chicago. The position occupied by the family in social circles is an enviable one, and they enjoy the esteem of a host of warm personal friends. In his political belief, Mr. CLIKEMAN is a Republican, and his progressive spirit and energetic disposition have been instrumental in the promotion of the public welfare. Sources