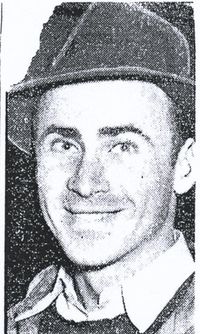 Edward R. Cassidy left today for Port Deposit, Md., where he will join Mrs. Cassidy and son Robert for the holiday season. Robert Cassidy is attending the Tome school at Port Deposit, and has been ill for the past two months with typhoid fever. Mrs. Cassidy has been with her son for the four weeks and he is reported much better. They all expect to return after the holidays.

Master Robert Cassidy of the Helderbergs, who is a student at the Tome school, Port Deposit Maryland, will spend the Christmas vacation with his parents, Mr. and Mrs. Edward R. Cassidy, arriving Dec. 20th.

Robert Cassidy was a US Army veteran having served during World War II. After Robert took part in the invasion of Southern France in World War II, he worked his way around enemy lines to visit with his mother in Port Blanc, France. There he learned his father Edward had died behind enemy lines in 1942. He was a Corporal in Italy in 1944.

ALBANY -- Robert I. Cassidy, 85, of Albany, died on November 11, 1996. He was born in the Isle of Jersey, Great Britain to the late Edward R. and Nelle Styer Cassidy. He has lived in the Capital Region for most of his life. Mr. Cassidy operated Perennial Gardens in Guilderland for many years as a Horticultural Contractor. He was a Horticulturist all his life. He was a member of the Guilderland Chamber of Commerce, and was a US Army veteran having served during World War II. Survivors include a lifelong family friend, Larry R. Scarborough of Poughkeepsie and three dear friends, Richard Hansen, John Tabner and John G. Miller. Funeral services will be Wednesday at 11:00 a.m. at the Tebbutt Funeral Home, 633 Central Ave., Albany. Friends are invited and may call on Wednesday from 10 to 11 a.m. Interment will be in St. Agnes Cemetery, Menands. Those who wish may send a remembrance to the Cathedral of All Saints, 62 S. Swan Street, Albany.
Edition: THREE STAR
Page: B6
Copyright, 1996, (c) Times Union. All Rights Reserved.