Before his enlistment in the Civil War, John Henry worked as a laborer.[1]

John was killed in battle June 16, 1864 at Petersburg, Va. by being shot through the head.[1] At the time he and Fred Mather were attempting to bury the regimental flag in the sand to protect it as he and the other men were about to be captured by the Confederates.[1] When John was killed, Fred Mather was splattered with blood but he managed to finish the burial of the flag before capture.[1] He was buried on the battle field.[5][6] His parents survived him and he left no dependents.[2]

Possible match for John Henry Canoll in Town Clerk's register for Knox. Name is similar, and enlistment date and location, and Regiment are the same. Census says family was living in Berne, NY


Killed in Battle June 6th 1864 at Petersburgh. Shot through the head buried on the battlefield 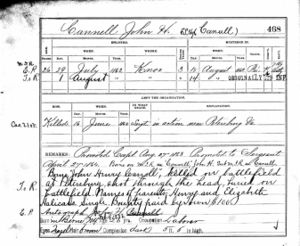