Difference between revisions of "Bryant, Myron"

Myron Bryant was born in Rensselaerville in July of 1839, a son of William H. and Hannah Bryant

He married Mary Cartwright who was born in December of 1864 in New York, at about 1872. They had the following known children:

No information is available about his military service other than his declaration in the 1890 Veterans Schedule which is shown below, but there is no reason to doubt that he served, particularly in light of the fact that he belonged to the GAR, as shown in the photo of his gravestone marker. 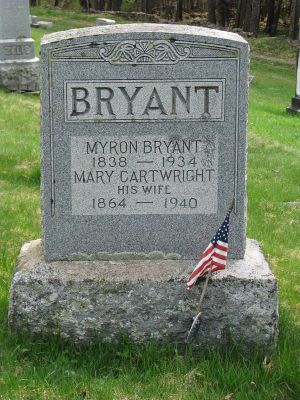