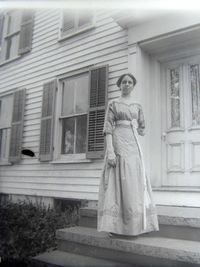 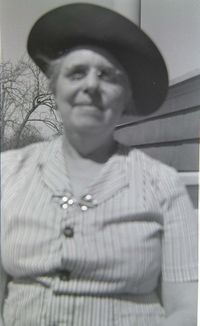 Luella was a farmer's wife as such she performed many farm chores and as well she was responsible for her home and family. There are several photographs of her operating farm equipment.[4]

Luella was raised by her paternal grandparents in Rensselaerville. While she was separated from her mother and sisters, they apparently saw each other frequently.

She married at 21 years of age to a farmer in Berne. As a farm wife, she actively took part in the farm chores including using farm equipment to plant and harvest.[4] The family raised chickens which added to her chores.[4] She canned vegetables and fruit that the family raised.

Luella and Frank traveled extensively generally within the local area, as they enjoyed nature and photography.[4]

Mrs. Frank A. Wright of Berne R.D.1 died Tuesday afternoon after a long illness. Mrs. Wright, the former Luealla Bassler,was born in Rensselaerville, and had been a resident of Berne for 53 years. She was a member of St. Paul's Lutheran Church. Mrs. Wright is survived by her husband; a daughter Mrs. Willam Flagler of Berne; three sisters, Mrs. Grace Phillips of Oakland, Calif., Mrs. Verta Abeel of Rochester, and Mrs. William Wallace of Guilderland; also by four grandchildren. Funeral services will be conducted Saturday afternoon at two o'clock at the Applebee Funeral Home, Delmar, with Rev. James D. Keller of St. Paul's Lutheran Church officiating. Burial will be in Woodlawn cemetery, Berne."

Funeral service Saturday afternoon at 2 o'clock at the Applebee Funeral Home, 403 Kenwood Ave., Delmar. There will be no calling hours.

IN MEMORY LUELLA B. WRIGHT