Alfred was born in Westerlo January 28, 1820, a son of Philip Laupaugh and Cecilia Jaycox

He married Julia Sweet who was born at about 1823, at about 1841 and had the following children: 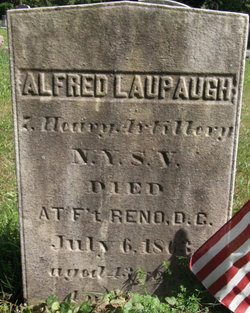 In a letter from Lt. Michael Henry Barckley dated July 9, 1863 from Fort Reno near Washington, DC:

"Day before yesterday one of our men was buried. The first since the company was organized nearly eleven months. His name was Alfred Laupaugh of Westerlo. Death caused by constant use of stimulants for the last ten or fifteen years. Quite a number of the officers and men of the regiment are sick at the present time, more so than common."

“Alfred Lawpaugh, of Westerlo, enlisted in Company K, Seventh Regiment, August 14, 1862. Died at Washington. His remains were brought to Westerlo and buried.”