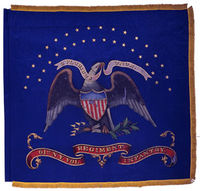 Addison was single at the time of his enlistment.

Addison B. Miller and his Civil War service was also recorded in the book: Howell, George Rogers, Bicentennial History of the County of Albany 1609-1886, Published 1886, page 817.

ADDISON B. MILLER OF BERN

Addison B. Miller was the son of Albert and Sophia Miller, and was born in Rensselaerville, August 18, 1845.

He was religiously educated, and early developed superior talents, a sound judgment, and correct moral principals. He was not a professed Christian, and when urging his parents to let him go to the war, his mother said that if he was a Christian she would give her consent. He replied: “Let me go, and I will try and become a Christian.” When told of the hardships and dangers of a soldier’s life, he said: “Some persons must go, and I am no better than others.”

He enlisted in Company D, Sixty-first New York Regiment. After having experienced some skirmishing, he wrote home that he had no more fear while fighting than he had while writing his letter. The marches through which he passed were very severe, but he endured all without a murmur.

On the 13th of December, 1862, as he was bravely charging the enemy’s batteries, a musket ball struck him in the right breast and passed through his lungs. He was borne from the field at night, and taken to a house in Fredericksburg, which was used by the Fifth New Hampshire Regiment as a hospital. His wound was dressed, and he lived until the next day, when he died at ten o’clock in the forenoon. His remains were wrapped in a blanket, and buried in a yard adjoining the house.

After he was wounded, he was conscious of his condition, and manifested a submission to the will of his Heavenly Father. He died putting his trust in God.

His letters which he wrote, having breathed the most earnest patriotism, and expressed his readiness to die for his country’s cause.

The following is an extract from one. The date is not given:

Dear Father and Mother—As I have just fifteen minutes to write, I thought that I would let you know that I am well.

We left Boliver Heights last Wednesday, and have been marching ever since. Yesterday we sere skirmishing all day. To-day I have been on picket duty in sight of the rebels. We expect a battle soon, and they must fight or run. This may be the last that you will hear from me, but I hope that I shall meet you in a better world than this. IT does not make much difference where or when we die, if we are only prepared. I hope and think that I am.