During the Revolutionary War, the Beaver Dam saw little action. The major threat would have been from the west where the British and their Indian allies repeatedly attacked the communities along the Mohawk Valley. The Schoharie Valley, even though protected by three forts and a large militia, still suffered from repeated attacks by the British and massacres by the Indians. Adam Chrysler, of Schoharie, who because of his British sympathies had been forced to flee at the start of the Revolution, led a number of the Indian massacres against his former neighbors.

The only incident of note that occurred in Beaver Dam during the Revolution was the massacre of the family of Capt. William Deitz. Unfortunately, the Switzkill stockade was constructed leaving four farms beyond its protection, one of which was the farmstead of Johannes Dietz, father of Capt. William Dietz. Capt. Dietz, along with his wife and four small children, lived on his parent’s farm in the upper reaches of the Switzkill Valley. The reason for choosing the Dietz family as the target for the massacre is obvious; it was to terrorize the local populace. If the family of the captain of the local militia was not safe, no one was safe.

In the late afternoon of 1 September 1781 the Dietz farm was attacked by Indians led by a British soldier. Capt. Dietz was taken captive, and in front of his eyes his elderly parents were massacred and scalped, as was his wife and children, along with a Scottish servant girl.

At the Dietz farm that fateful day was a hired hand, John Brice, a young Scottish lad of about 13 or 14 whose folks had settled several miles to the south near what is now the hamlet of Rensselaerville. To make matters worse, his 11-year-old brother, Robert, who had been sent to the Weid-man mill at the falls in Beaver Dam that morning to have some grist ground into flour, stopped at the Dietz farm on his way home to spend the night with his brother. The raid resulted in two letters notifying Governor George Clinton. On 3 September Hugh Mitchell, son of Major Andrew Mitchell, wrote: "I just now rec'd. Information by a party who had been to the Helbergh, (what is now the Town of Knox), on a Scout, that one Captain Teets who lived at the Beaver Dam was taken prisoner last Saturday night by a party of the Enemy consisting of about twelve or fifteen men mostly Indians. The rest of Captain Teets family consisting of his old Father and seven other persons were most inhumanly Murdered, and his house and barn burnt.

On 7 September General John Taylor wrote Clinton: "A Party of the Enemy Consisting of fifteen Tories & In-dians, murdered Capt. Dietz's Father & Mother, his wife & four children with one Scotch Girl & took himself off after having Exhibited to his View this horrid Scene; the house and Barn was Burnt. They were pursued & overtaken at Breakabeen, but permitted to escape.

The Indians took the Brice boys and Captain Dietz to western New York, where Dietz was confined at Fort Nia-gara, which was under the command of the British. George Warner, who had been captured in Schoharie earlier that summer, reported seeing and conversing with Captain Dietz at Niagara. Warner said that Dietz “appeared heart-stricken and in a decline, under which he sunk to the grave not long after.” (Many early accounts of the Schoharie raid in which George Warner Jr. was captured say the date was 26 July 1782. This is based on an error in Simms’ History of Schoharie County. Mark Sullivan, writing in the Schoharie County Historical Review in the spring of 1983, presented credible evidence, including contemporary news accounts, that the raid was actually 26 July 1781.)

Josiah Priest gives a riveting description of the massacre in his Stories of the Revolution published in 1836. It was based on an interview with Robert Brice, who had been sold by his Indian captors to the captain of a sloop on Lake Erie. (This account is posted on the Internet on the Berne Historical Project site, www.Bernehistory.org)

There is also an account of the massacre by Simms in his 1845 History of Schoharie. It is accurate except for the date, but not nearly as compelling reading as the account by Priest. 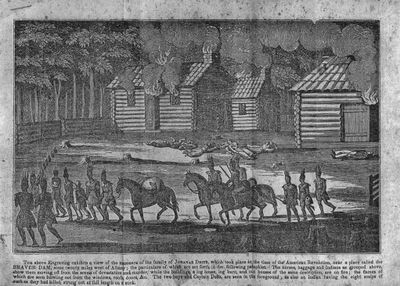 steel engraving frontispiece from "Stories of the Revolution," by Josiah Priest; first published 1836. Engraving was made from a painting by Jacob Dietz, son of Johanness which is now in the GOHS museum

This steel engraving is the frontispiece from Stories of the Revolution. It was based on a painting by Jacob Dietz, son of Johannes. In the lower left foreground the fourth figure from the left is Capt. William Dietz, hands bound behind him, looking back at the horrible scene of the scalped bodies of his murdered family. Next to him are the boys Robert and John Brice. To the right of center, in front of the burning barn, is the body of William’s father, Johannes Dietz. In the center are the figures of Johannes’ wife, Maria, plus the wife of Capt. Dietz and the servant girl who was working there. To the left of the women are the four murdered and scalped children of Capt. Dietz, all under the age of ten, one of which was a babe in arms. It is difficult to make out, but the second figure from the left is that of an Indian holding a long pole in the air to which are tied the scalps of the eight victims. 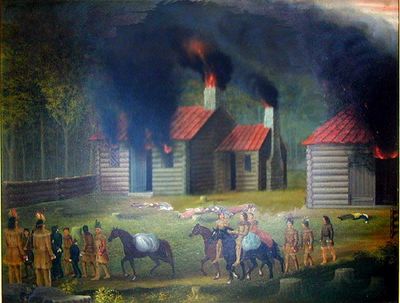 When the massacre was discovered the following day, Lt. Johan Jost Dietz, (a nephew of Johannes,) stationed at the Lower Fort in Schoharie, was notified and came to bury the dead. Various histories state that the massacred family was buried in a mass grave in line with the fence alongside the Reformed church. In 1781 this would have been the log church which appears on the 1787 Cockburn survey map to have been located on the bank of Fox Creek rather than on the knoll where the framed Reformed church building was constructed in 1786. (Based on the dates, the survey of the church lot seems to have been made in 1786 prior to the construction of the framed church consecrated in September 1786. If that is correct, the burial of the Dietz family would have been near the old log church.)

It is significant that the individual who was the focus of the two reports of the massacre to Governor Clinton was Captain Dietz; his father, Johannes, was not even men-tioned by name. (An early DAR application of a Dietz descendant said that Johannes “was a member of the Commit-tee of Safety of Beaver Dam.” Since members of the Committees of Safety were the community leaders and in charge of supplying and directing the local militia, if Johannes had been a Committee member he would have been mentioned first in the reports to the governor. Actually, Beaver Dam was too small to have its own Committee of Safety; and his name is not on any published lists of mem-bers of the Committees in Albany and vicinity.)

The focus of the attack was clearly Capt. William Dietz, not his father. As a captain of the local militia he was one of the most important persons in Beaver Dam. The British plan was to terrorize the community by showing that if the family of Captain William was not safe, no one was safe. The Dietz family was especially vulnerable since their home was on the edge of the settled area, the first one that Indians would come to over West Mountain from the south-west. Although a fort or stockade had been built in the Switzkill Valley on the farm of Adam Dietz, it was a mile or more to the north, near the south edge of the most concentrated settlement. The farms of Johannes Dietz and George Ball were beyond the stockade to the south.

In 1926 the Tawasentha Chapter of the Daughters of the American Revolution erected a monument on Switzkill Road near the massacre site dedicated to the family of Johannes Dietz who were killed. (It would have been more appropriate for the DAR memorial to have been dedicated to Capt. William Dietz since he was the focus of the attack and it was his entire family (parents, wife, and children) who were massacred [HHM].

There was some dread of Indians among the early settlers and events showed that the fear was not unfounded. Two lads, sons of Mr. Brice, who lived in the northern part of the town, were taken prisoners by the Indians about the time of the massacre of the Deitz family in Berne. They had set out to go to Berne, when they were seized, marched back- by the Basic path in sight of their father's house, and carried away and kept prisoners by the Indians for many years. These Indians, under Brant at this time, came down past the site of Preston Hollow and camped on the site of Cooksburg, and thence passed on over the hills to Blenheim and thence to Schoharie. They were followed by armed men, who, however, were unable to overtake them.